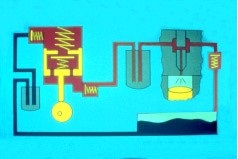 The 1.1 liter engine fuel system utilizes a mechanical unit injector combining both the nozzle assembly and the high pressure fuel injection pump. The fuel transfer pump) pulls fuel from the fuel tank through an in-line primary filter and sends fuel to a spin-on type secondary fuel filter. From the fuel filter, fuel enters a drilled passage at the rear of the cylinder head. The drilled passage carries fuel to a gallery around each unit injector and provides a continuous flow of fuel to all of the unit injectors. Unused fuel exits the cylinder head, passes through a 1.3 mm (.050 in.) pressure regulating orifice and a check valve and returns to the fuel tank. This system is very compact and eliminates external high pressure fuel lines. Additionally, this system allows very high injection pressures and short injection times to aid exhaust emission control. 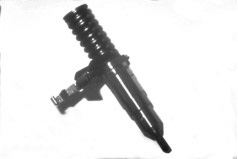 The fuel injection system for this engine is a mechanical unit injector type. The fuel injection pump and nozzle are combined in one injector assembly for each cylinder. All high pressure lines are eliminated. Fuel lines consist of supply lines to and from the cylinder head, fuel filter and fuel transfer pump. Fuel is supplied to each injector by an internal passage running the full length of the head.

Each unit injector has its own fuel rack, controlled by the governor with a control shaft which actuates all of the unit injectors simultaneously. 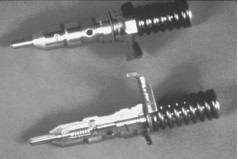 The large extension on the side of the injector is the hold-down clamp. Shown at the bottom of the injector cut-away is the rack. Its movement controls the rotation of the helix on the scroll of the plunger, thus determining the volume of fuel to be injected into the cylinder. The unit injector consists of a scroll-type high pressure plunger and injector nozzle. Effective stroke of the plunger, during which high pressure fuel is injected, is controlled by the scroll position which is actuated by the governor and rack.

This system is basically like other Caterpillar scroll type fuel systems except the high pressure pumps are separated and individually positioned above each combustion chamber thereby eliminating the need for high pressure fuel lines. Total plunger stroke is always the same and determined by the cam lobe lift and rocker arm motion.

The effective stroke, however, is determined by the scroll position. The plunger rotates about its vertical axis to move the scroll, hence lengthening or reducing the effective stroke. During the time both ports are covered, fuel is injected. Fuel pressure forces the check valve off its seat for injection, and once pressure drops, a spring closes the check valve. Fuel surrounds the injector from the top o- ring to the raised sealing ring at the base of the nozzle cone. 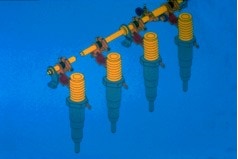 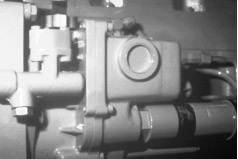 The governor is mounted high on the left side on the front housing of the engine. It is driven by the cam gear in the front gear train. The governor regulates fuel delivery through a linkage to the control shaft which moves all of the injector racks simultaneously.

The fuel transfer pump is located in the forward portion of the governor housing.

Power is set at the rack control shaft linkage under the valve cover using a dial position indicator. Governor adjustments are set on a dynamic bench test machine. The governor is also sealed after bench setting and is not to be adjusted except on the governor bench. 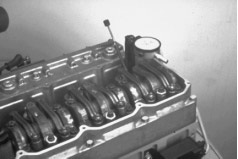 The injectors can be synchronized with the rocker arm assemblies in place such as when the valve setting and fuel injector timing is adjusted during preventive maintenance. 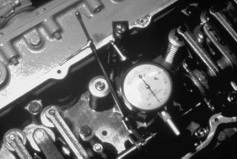 Injector synchronization is much easier with the rocker arms removed. Injector synchronization must be performed whenever the control linkage has been loosened or an injector is removed. Only the injector that was removed must be synchronized unless the injector removed was the No. 1 injector. In that case, all injectors must be synchronized since the No. 1 injector is used as a reference during the setting procedure. The valve clearance and fuel timing should be checked after installing the rocker arm assemblies.