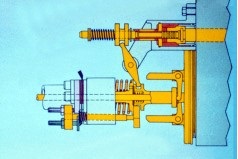 At the point the rack screw (green) first comes in full contact with the torque spring, the rack is at full load point (rated). As demand horsepower increased, with the rack at rated position, the engine speed decreases as the engine goes into lug (full throttle with rpm less than rated rpm). Depending upon the rigidity of the torque spring, at some point, the governor spring causes the rack screw to begin to depress the torque spring. As this occurs, the rack position increases allowing more fuel to be injected per stroke. This increase in rack position continues until the torque screw (violet) contacts the stop lar. This is the full torque position of the rack. 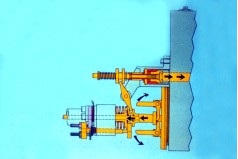 The flyweights swing out as rpm increases. This moves the riser to compress the governor spring and the pivoting lever moves the sleeve and spool toward the “fuel off” direction. 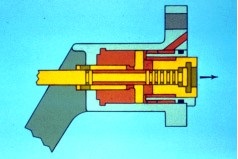 As the valve spool moves in the direction shown, a passage in the piston opens and allows pressurized oil to enter the chamber behind the piston. At the same time, the spool closes the passage behind this chamber. The pressurized oil forces the piston and rack toward the “fuel off” position. With no load on the engine, the rack will move until the low idle setting is reached. This setting is determined by the amount of force put on the governor spring by the throttle resting against the low idle stop screw. 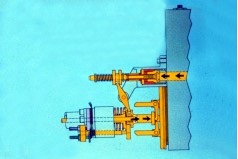 If the engine were to slow down, the flyweights would swing in which would move the riser away from the governor spring and the pivoting lever moves the sleeve and spool toward the “fuel on” direction. 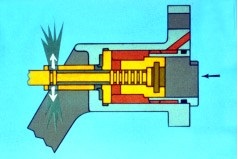 Valve Spool – “Fuel On”This spool movement blocks the passage in the piston and opens the drain passage behind the chamber. Now pressurized oil forces the piston and the rack in the direction shown (fuel on) so fuel delivery is increased until the desired rpm is obtained. The back and forth movement of the rack in the “fuel off” direction and in the “fuel on” direction will continue until there is a balance between the governor spring force and the flyweight force. 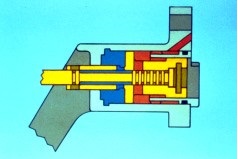 This drawing shows the balance point of the servo spool and piston. When flyweight force equals governor spring force, the valve spool blocks the oil in the chamber behind the piston. Rack position does not change and engine rpm is constant.