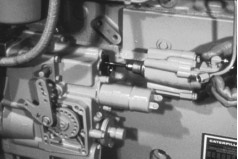 The fuel ratio control mounts on the rear of the governor housing. Its purpose is to limit smoke and improve fuel economy during rapid acceleration. It does this by controlling rack movement in the fuel ON direction until there is enough (boost pressure) to allow complete combustion in the cylinders. With the fuel ratio control properly adjusted, it also minimizes the amount of soot in the engine. 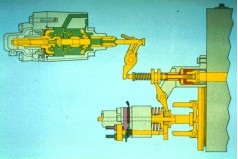 A stem extends out of the fuel ratio control. This stem fits in a notch in a lever which contacts the end of the rack in the servo valve. Air inlet pressure (boost) is sensed by a diaphragm in the control. This diaphragm pushes against a spring and spool. The spool movement controls the oil flow which moves a piston connected to the stem.

The stem is out of the way during startup, so full rack is available on all mechanical 3406s. The same is true of 3300s, but beginning with the 1994 3306C truck engine, the stem is partially retracted during startup, but does not go to full retraction until the engine develops oil pressure. 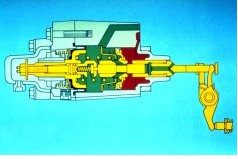 When boost is low, the stem is in the set (cocked) position and the lever limits rack movement in the fuel ON direction. As boost pressure increases, The stem extends and moves away from the lever and the rack can move to the left allowing more fuel to be supplied by the injection pumps. When manifold pressures of approximately one-half rated boost or above is reached, full fuel rack travel is available. Thus. anytime there is sufficient boost, the stem of the fuel ratio control is extended and does not control or affect the movement of the rack. This permits smooth, rapid acceleration but at a rate that allows complete combustion and low emissions.

One thought on “Fuel Ratio Control”