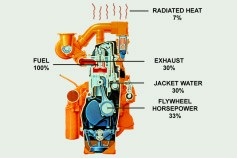 The cooling of an engine depends on the principles of conduction, convection, and radiation of heat energy in order to keep the engine running at the proper operating temperature. The coolant receives the heat that is conducted to it from the metal components of the engine; the engine block, the cylinder head, etc. The coolant is then forced by the water pump from the engine to the radiator. At the radiator the heat energy is transferred by convection to the air moving across the fins of the radiator. In addition the engine also radiates a certain amount of energy to the atmosphere directly in the form of heat that is given off from the engine to the surrounding air.

The engine may also have some type of coolant cooled aftercooler, oil cooler, hydraulic cooler, or transmission cooler.

Some marine or stationary systems may have a heat exchanger in place of the radiator.

The pump is what causes the coolant to flow in the cooling system. Inside the engine are coolant passages that the water flows in. These passages include what is sometimes called a “water jacket.” The water jacket is the large cavity in the block and the head that surrounds the cylinders of the engine. This cavity is normally full of coolant and is what keeps the engine at a uniform temperature. 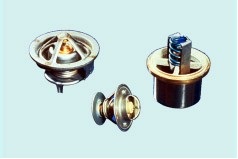 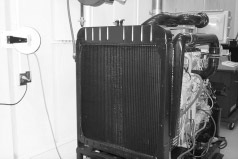 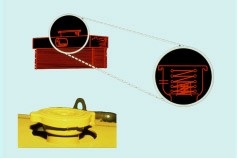