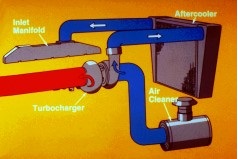 Aftercoolers are used in conjunction with turbochargers in order to lower the temperature of the air coming from the turbocharger before the air enters the cylinders. This causes the air to be more dense, therefore contain more oxygen in a given volume. This increase in oxygen in the cylinders translates into greater power and efficiency from the engine.

There are different types of aftercoolers that are used on Caterpillar engines: All aftercoolers serve the same purpose however, remove heat from inlet air providing cooler and more dense air to the cylinder.

With the air to air aftercooled system, a separate cooler core is installed in front of the vehicle engine radiator. Ambient temperature air is moved across the aftercooler core by the engine fan.

Pressurized air from the turbocharger is cooled by the air to air aftercooler before entering the intake manifold. This is an extremely effective method for cooling the turbocharged air when a large volume of fresh cool air can be pushed through the aftercooler. For this reason this is the configuration found most often in on-highway truck applications. 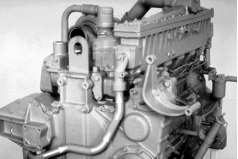