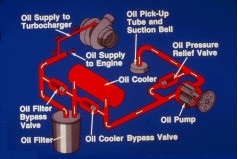 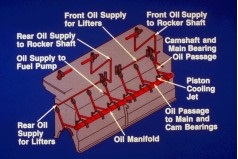 The lubrication system inside the engine includes the following components: 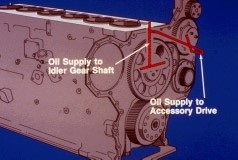 The lubrication for the front gear train includes the:

Let’s trace the flow of oil through each component. 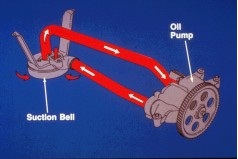 Many Caterpillar engines are designed to work in applications that may require the engine be at a steep angle. A track type tractor for example, typically is used in applications that require the machine and engine be at a relatively steep angle from the horizontal. In order to ensure that all of the engine oil does not collect in one end of the oil pan, away from the suction bell, many engines also have a scavenge oil pump. A scavenge oil pump is nothing more than an oil pump that ensures that there is always oil in the main sump. This keeps the lubrication system from being starved of oil at steep slopes. 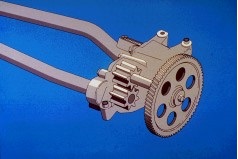 The oil pump is a positive displacement gear type pump, driven by the crankshaft gear. 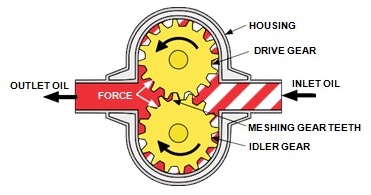 The basic gear pump is the type most commonly found on Caterpillar engines. This pump has two gears in mesh. One gear is driven by the engine and the other is an idler gear. The two gears rotate in opposite directions capturing the engine oil, and drawing it around the inside of the housing. When the teeth come together in mesh the oil is forced out of the teeth and flows through the pump outlet to the rest of the lubrication system. 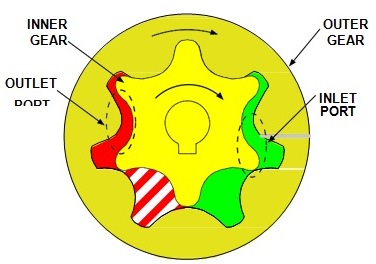 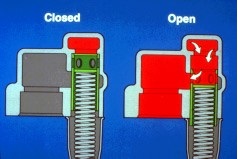 The valve will remain on its seat (closed) until the oil pressure at the pump rises above the pressure that is exerted by the spring in the valve. 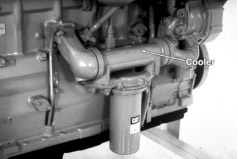 Many engines are equipped with an oil cooler assembly. The cooler utilizes an engine oil to coolant heat exchanger. Hot engine oil passing through the cooler element transfers heat to the engine coolant. This cooling of the oil helps to maintain the lubricating properties of the oil under heavy engine load. 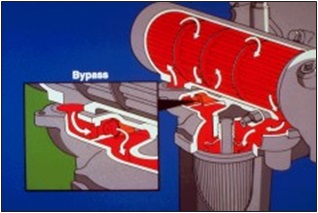 During cold start up, the cold oil will also resist flowing through the oil cooler. To prevent this resistance from causing oil starvation, an oil cooler bypass valve is incorporated into the cooler assembly. This bypass valve senses oil pressure between the inlet and outlet of the cooler. It is designed to open and bypass oil flow around the cooler when the oil is cold and thick. 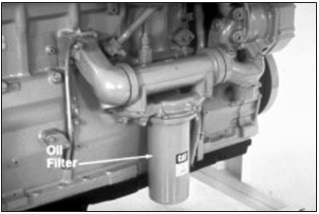 The oil filter base mounts at least one filter element. Most Caterpillar engines use spin-on style full flow filters in order to remove damaging foreign materials from the engine oil. 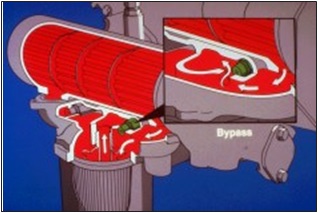 The engine oil flows in the outside of the filter, through the filter media, and out the hole in the center of the filter under normal operating conditions. However, the filter element resists cold oil flow. It also resists oil flow when it becomes dirty. To prevent damage to the element and possible oil starvation to the system, the filter base is equipped with a filter bypass valve. The bypass valve senses the pressure differential across the element and will open, bypassing oil flow around the element if the pressure becomes excessive. This is one reason why proper maintenance procedures are so important. Dirty filters can lead to serious problems. 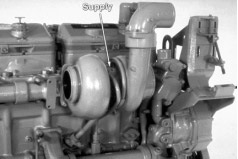 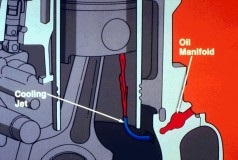 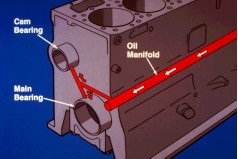 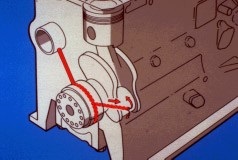 A groove around the inside of the upper main bearing shells supplies oil flow to internal drilled passages in the crankshaft. The internal crankshaft passages supply oil to the connecting rod bearings. 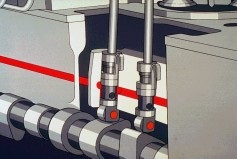 A groove around the outside of the front and rear camshaft bearings supply oil flow to the front and the rear valve lifter passages. Each lifter body, roller and lower push rod socket receive lubrication from these passages. 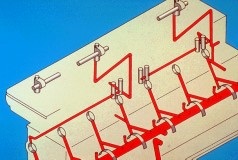 Drilled passages in the rocker shafts supply the upper valve train with oil flow. This is also used to supply oil to the compression release brake (Jake BrakeÒ), if equipped. 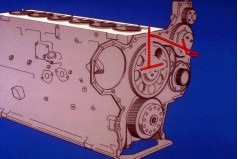 The front gear train idler gear and the accessory drive receive oil flow from an internal drilled passage that is connected to the front camshaft oil passage. 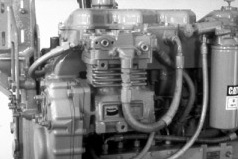 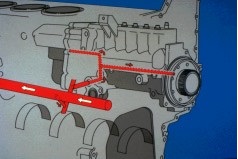 In a typical Caterpillar pump and line fuel system the fuel pump, governor and hydraulic timing advance unit receive oil flow from a port on the side of the block. This port is connected to the number three main and camshaft passage. 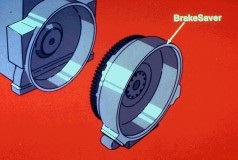 As we learned earlier, the BrakeSaver retarder is a hydraulic retarder that provides smooth, efficient vehicle breaking on long downhill grades. 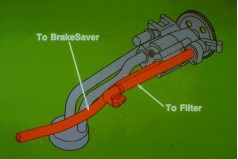 The rear section of the oil pump supplies oil for BrakeSaver operation and oil cooling. 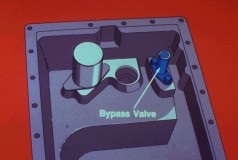 When the oil is cold, the high viscosity causes the bypass valve to open and drain the oil from the rear section of the pump back into the oil pan.