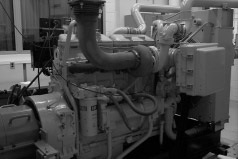 Some of the basic specifications that a manufacturer makes on an engine that affect performance of the engine are:

The performance of an engine is typically rated by comparing power output and/or efficiency of the engine. These evaluations can be measured in several different ways. The basis for these measurements and the manufacturer’s specifications must be known in order to better understand the effects that all of these factors and measurements have on engine performance.

Top dead center (tdc) is a term used to describe the position of the piston when the piston is at its highest point in the cylinder. This occurs when the crankshaft and the connecting rod are fully extended and straight with one another. Many events in the operation of the engine are identified by crankshaft position, measured in degrees either before or after tdc.

Bottom dead center (bdc) is a term used to describe the position of the piston when the piston is at its lowest point in the cylinder. This occurs when the crankshaft and the connecting rod are fully retracted and straight with one another.

Bore is a term used to describe the diameter of a single cylinder in an engine. Bore is typically measured in millimeters or inches. 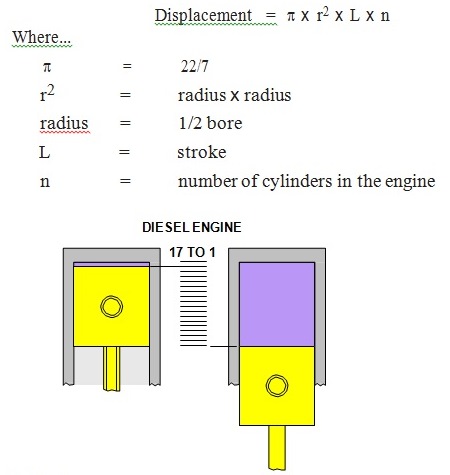 Higher pressures will cause an increase in the temperature of the air and fuel in the combustion chamber. This high temperature (approximately 1000°F) will cause the diesel fuel to ignite without the use of a spark plug.

Work is defined as a force that is applied over a distance.

Power is defined as the rate at which work is performed

Where t is the time that the work is performed in.

There are several different types of power that are often discussed.

Indicated horsepower (IP) is the power that an engine is theoretically able to produce. This is found by multiplying the displacement of the engine by the mean effective pressure in the cylinder in pounds per square inch and dividing it by 33,000.

Brake engine horsepower (BP) is the power that is found by physically testing an engine on a dynamometer. A dynamometer is a device that is coupled to an engine for the purpose of measuring the torque and the horsepower output of the engine.

Friction power (FP) is the power that an engine requires in order to overcome the frictional losses of bearings, gears, and other moving parts of the engine. Friction power increases as the size and/or the speed of an engine increases.

When the engine is running, the combustion that takes place causes the pistons to move downward in the cylinder. This downward piston motion pushes on the connecting rods and causes the crankshaft to be turned. The resulting twisting force produced by the crankshaft is called torque.

The torque and the horsepower that an engine produces are related to one another with the following equation:

NOTE: This formula can not be used with metric units. Convert the metric units to english units before performing the calculation.

The constant of 5252 is derived by dividing the 33,000 lb in Watt’s horsepower formula by the angular value of one rotation of the crankshaft in radians.

Torque is measured in foot-pounds (ft lb) in the english system and in Newton-meters (Nm) in the metric system.

A certain amount of force is required in order to slide the surfaces of two objects against one another. The resistance to this motion is called friction. As the load is increased, friction is increased. For example it requires more effort to slide a heavy object than it does to slide a light object. The condition of the two surfaces in contact also makes a difference. This is why the lubrication system in an engine is so important. The oil film between the moving parts of an engine keep the friction between the two surfaces very low. This not only gives the engine a long service life, but also creates less drag on the engine, reducing the amount of frictional power. This allows the engine to produce more brake power.

Sir Isaac Newton’s first law of motion states that an object in motion tends to stay in motion and an object at rest will tend to stay at rest, until acted upon by an outside force. This phenomenon is due to objects possessing inertia. The amount of inertia an object has is directly proportional to the amount of mass that the object has. For example a car has more inertia than a bicycle. This is why it is harder to move or stop a car than a bicycle.

Thermal efficiency is the degree to which an engine is able to successfully convert the energy in the fuel into heat energy to cause the pistons to turn the crankshaft.

Fuel efficiency is defined in several different ways. The most common of which is kilometers per liter (km/L) or miles per gallon (mpg), which would be used to describe the fuel efficiency of an engine in an over the road application such as in a truck.

Fuel efficiency for marine or industrial applications may be expressed in liters per hour (Lph) or gallons per hour (gph) at rated speed.

Fuel efficiency may also be expressed in brake specific fuel consumption (bsfc). Bsfc is defined as the amount of fuel used per unit of power and time. The bsfc of an engine is expressed in either g / (kW hr) or lb / (hp hr).

In order to produce the desired levels of power, diesel engines require a large volume of air. Therefore the atmospheric pressure, the ambient air temperature, and the relative humidity of the air play a large role in the performance characteristics of the engine.

As an example, due to increased pressure at sea level the air is more dense than the air on top of a mountain. The dense air allows for more air molecules to flow into the cylinder. This allows for the fuel to be more completely burned in a diesel engine, which produces more power. This is why engines perform better in lower altitudes, the air is more dense.